FOCUS ON ISSUES AND DECISIONMAKING: Do Your Elected Officials View Music Education as a National Priority? 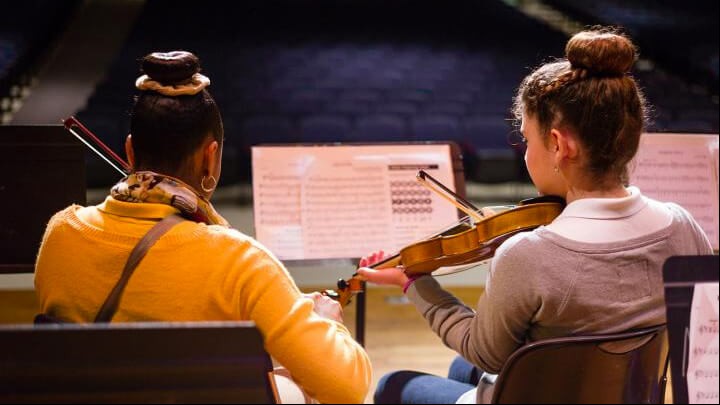 As a member of Congress, I represent the people of Clark County, Nevada, one of the fastest growing communities in the country. As our community has grown at a rapid pace so has the Clark County School District.

I hear from my constituents on a broad range of issues every day and appreciate their taking time to let me know where they stand. This communication is critical because I serve in Congress to represent their views. When constituents visit my Washington office, the first thing they notice is a piano that stands as a symbol of the importance music has in my life. But my piano is much more than a symbol. It is very important to me because I try to steal away a few minutes to play every day.

When a constituent told me about the SupportMusic.com Coalition and its support of music education, I just had to be part of it. This advocacy effort combines two things I am completely passionate about----music in our schools and participation in the democratic process.

I know first-hand about the power of advocacy. I also know about the unique power of music. And, my positive experiences with music have had a great impact on the journey that has led me to serve in the U.S. Congress. Being a member of Congress is the most rewarding experience I have ever had, and I am grateful to the people of my district who have entrusted me with this responsibility. Not unlike my responsibilities in Congress, all of us have an opportunity to express our concern for what we care about, and I urge you to become involved in showing your support for kids and their access to quality music programs in their schools.

Music has been a powerful force in my life. In the early 1960's I had the opportunity to take piano lessons when I entered the first grade. At first I resisted, but I followed the encouragement of my parents and their belief that music was a critical part of my education. In 9th grade a few friends and I formed a rock-n-roll band, the Lazy River Band. Two years later, a few of us formed another band, Shadrack, which recorded a 45-rpm record and an album. The Lazy River band still gets together every year in Humboldt, Iowa, where we grew up, to play for local charities.

In Congress, to keep in music-shape, I formed a band with four other members of the House of Representatives. We call ourselves the "Second Amendments," and have had the honor of playing numerous concerts for our troops in Europe, Iraq, Kuwait, Afghanistan and Germany as well as playing for many charities.

When I think about the influence of music on me as a student, I know that the discipline and the teamwork I learned throughout the years, playing individually or collaboratively, have been invaluable lessons applicable to every aspect of my life. Music developed in me a clear understanding of something powerful and enduring and created a pathway for me to be both a life long learner and a life long musician.

I place great value on the impact of music education and music making. For these reasons, I believe strongly that music must be a fundamental component of the curriculum in our schools and that all students should have access to quality, school-based music programs.

When I came to Congress in 2003, I jumped at the opportunity to serve on the Education and the Workforce Committee. I wanted to make sure we continued to make music a priority in our schools, and this committee has jurisdiction on education policy. With funding challenges in our schools, every community is faced with cuts that are too often targeted to music and arts programs. While these decisions are made at the local level, we in Congress must strengthen federal policies that first and foremost designate music and the arts as core curriculum subjects. The full balance of a child's learning is dependent on a number of things, including reading, math and leadership skills, but music and the arts must be recognized as equally important to a child's growth.

In my perspective and from my own personal experience, music is the glue that bonds everything. I believe music is a true avenue to world peace because it is an international language.

A Hometown Perspective on Concurrent Resolution 121

Another reason I am such a strong supporter of music education is that I have seen the remarkable music programs in our school system, the Clark County School District (CCSD), and their positive impact on our students. Clark County has been recognized as one of the 100 Best Communities for Music Education in the United States for many years. There are more than 50,000 students in CCSD, grades 6-12, who elect to take music classes. Our school leaders believe that these exemplary music programs have saved many CCSD students. Our innovative Mariachi programs are changing lives by the day.

This year I am the original cosponsor, along with my friend Jim Cooper from Tennessee, of House Concurrent Resolution 121 recognizing the benefits of school-based music education. The resolution states that music education grounded in rigorous instruction is an important component of a well-rounded academic curriculum and should be available to every student in every school. The resolution also states that learning music is important because it develops skills needed by the 21st Century workforce such as critical thinking, creative problem solving, effective communication and teamwork. It also states that music in schools makes students more likely to graduate and helps them achieve in other academic subjects such as math, science and reading. The resolution passed both the US House of Representatives and the US Senate unanimously.

As American citizens, I believe we all have the right and the responsibility to tell our elected officials, whether on the local, state or federal level, our views on issues that are important to us. And it is the right and the responsibility of these officials to listen carefully and objectively. When you are truly passionate about an issue like support for music in our schools, and armed with facts and research, you will be heard.

When your elected officials are called upon to make tough decisions they rely, as I do, on you, their constituents, to help them gather as much information as possible and communicate their concerns and opinions. I urge you to utilize the great resources of SupportMusic and, using the research provided, the Community Action Kit, to make your voice heard about the value and importance of music education: it can make a difference in the quality of education for all children.