Music Education at the Border

"Children here are in so much need and we want to be able to create something better for them. For many of our students, this music education program is a life line." - Rosy Vega-Barrio, Superintendent, Tornillo Independent School District 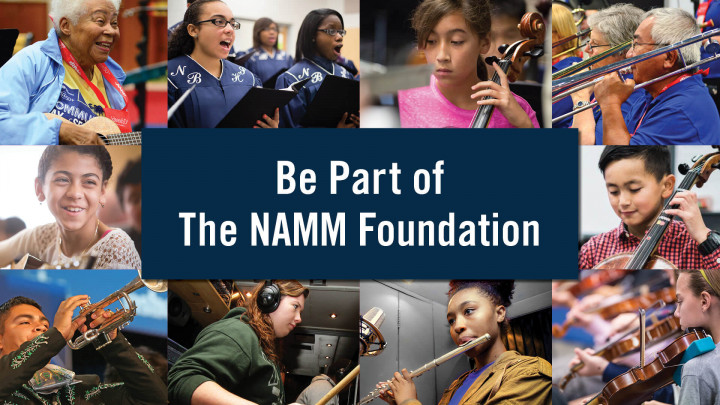 Music Education at the Border

The NAMM Foundation is pleased to announce its new program, "Music Education at the Border," an expansion of the El Sistema-inspired outreach program in collaboration with the El Paso Symphony's free after-school music education program, Tocando in Tornillo,  at Tornillo Elementary School in Tornillo, TX. Tocando began at Hart Elementary School in El Segundo Barrio in El Paso, TX in September 2013 as an after-school music education program that uses music education as a way for children to acquire the skills needed to achieve teamwork, self-confidence, leadership, and academic success.

Executive Director of The NAMM Foundation Mary Luehrsen announced the partnership at The Grand Rally for Music Education at The 2020 NAMM Show, "New this year, simply because our hearts were breaking for the children and families impacted by the crisis at the Mexican border--and armed with our belief in the healing and unifying power of music--we are embarking on a new project: Music Education at the Border." Luehrsen continued, "We know we can't solve the complex issues confronted there, but we are confident and believe deeply in our hearts that music can heal the children and families facing challenging circumstances. In other words, we will do our part!"

With financial support from The NAMM Foundation's "Music Education at the Border" project, Tornillo Elementary School will be able to hire a full-time music teacher, to provide students with musical instruments, and to develop a rich music curriculum for elementary school children, many of whom were brought into the international spotlight when a "tent city" was constructed to hold children separated from their parents. Despite relocation efforts, many children who remain in Tornillo are part of a displaced and impoverished migrant community.

Eric Booth, author, award-winning teacher, and essential leader in the El-Sistema movement said of the Foundation's border project, "I think we're going to see a domino effect once we get this program up and running. And the community itself is kind of giddy with excitement when they've heard that people outside of Tornillo are interested in what they're going to be doing, and they're looking at instruments and thinking they're going to get to play them! It has the same feeling that I've found when I would be in a tough neighborhood in Rio or in Colombia, that same feeling of giddy excitement from kids who are going to have music come into their lives."

How You Can Help

Your gift to The NAMM Foundation’s Believe in Music Fund supports programs like "Music Education at the Border," El Paso’s El Sistema-inspired outreach program, and other music-making opportunities for people of all ages and abilities.

"Children here are in so much need and we want to be able to create something better for them. For many of our students, this music education program is a life line." - Rosy Vega-Barrio, Superintendent, Tornillo Independent School District

Make a donation to the Believe in Music Fund.

From the Ash family to the Gretsch family and the whole industry in general, we thank you so much for this initiative; we will not let you down. My mom is probably looking down on us with a huge smile