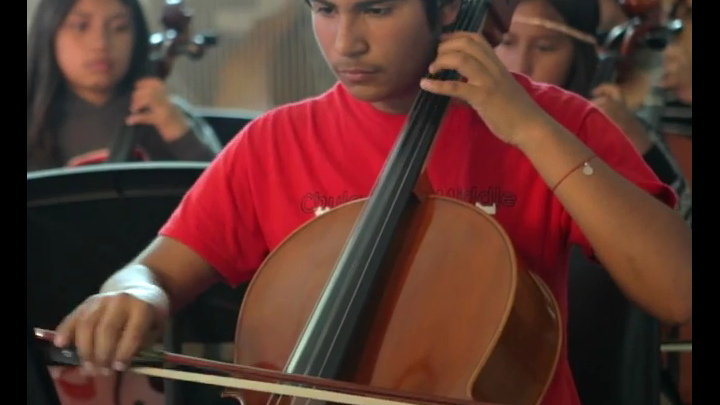 Every day, The NAMM Foundation helps to create more active music makers by supporting organizations that share NAMM’s mission. One such group is the Community Opus Program in San Diego, Calif., where they offer hope to struggling kids like Bruno Bello.

Thirteen-year-old Bruno Bello is gifted, but you would never have known it to look at his grades just a few years ago. “Before I had music, I was having trouble” he admits. “I didn’t see the point in homework or paying attention at school. Everything I tried was either too easy or I wasn’t good at it, like sports.”

Also upset by his parents’ recent divorce, Bruno began acting up in class, refusing to do his assignments. After receiving calls from his teacher, Bruno’s mother took him to see a doctor, thinking he might need ADD medication. However, the physician gave him a different kind of prescription.

“The doctor told me Bruno is very bright but wasn’t being challenged,” Veronica Bello explains. “He said Bruno needed discipline, but a discipline he likes––something that really challenges him.”

That’s where the Community Opus Project came in. Launched by the San Diego Youth Symphony and Conservatory, the project offered afternoon music instruction to children in the Chula Vista Elementary School District, which hadn’t provided music instruction in more than 15 years.

Music’s positive effect on the kids quickly became apparent, especially in Bruno’s case. His grades began to improve and so did his attitude. “It gave me a lot more confidence,” says Bruno, who now plays the cello in two chamber ensembles. “It gives you hope to know that if you really want something, you can make it happen. If I want to go to a good college, it can be done.”

Bruno is now taking all honors classes and getting A’s in them, something his mother could never have imagined. “He’s doing great and to see him that passionate is…well, I can’t explain,” says Veronica. “If he continues like this, Anything is possible.”

The results of the Community Opus Project were so impressive that in 2013, the Chula Vista Elementary School District committed to reinstating in-school music instruction for all of its nearly 30,000 students.

Community Opus Project Director Annette Fritzsche directly attributes the funding they receive from The NAMM Foundation for making the program a reality. “Without that, we wouldn’t be able to go into these districts and partner with these families and these students.”