Floating Strings: The Remarkable Story of the Harp Guitar in America 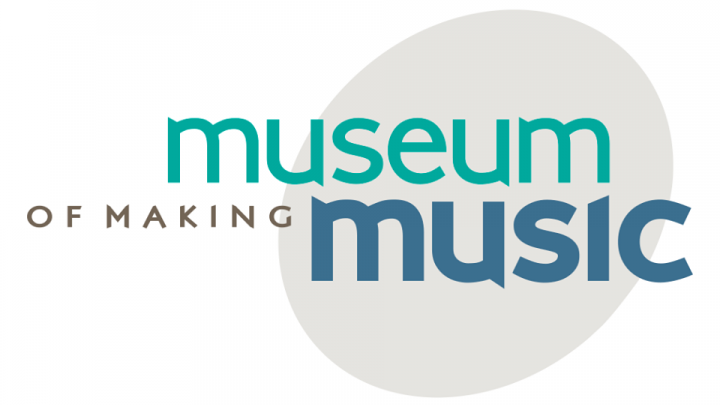 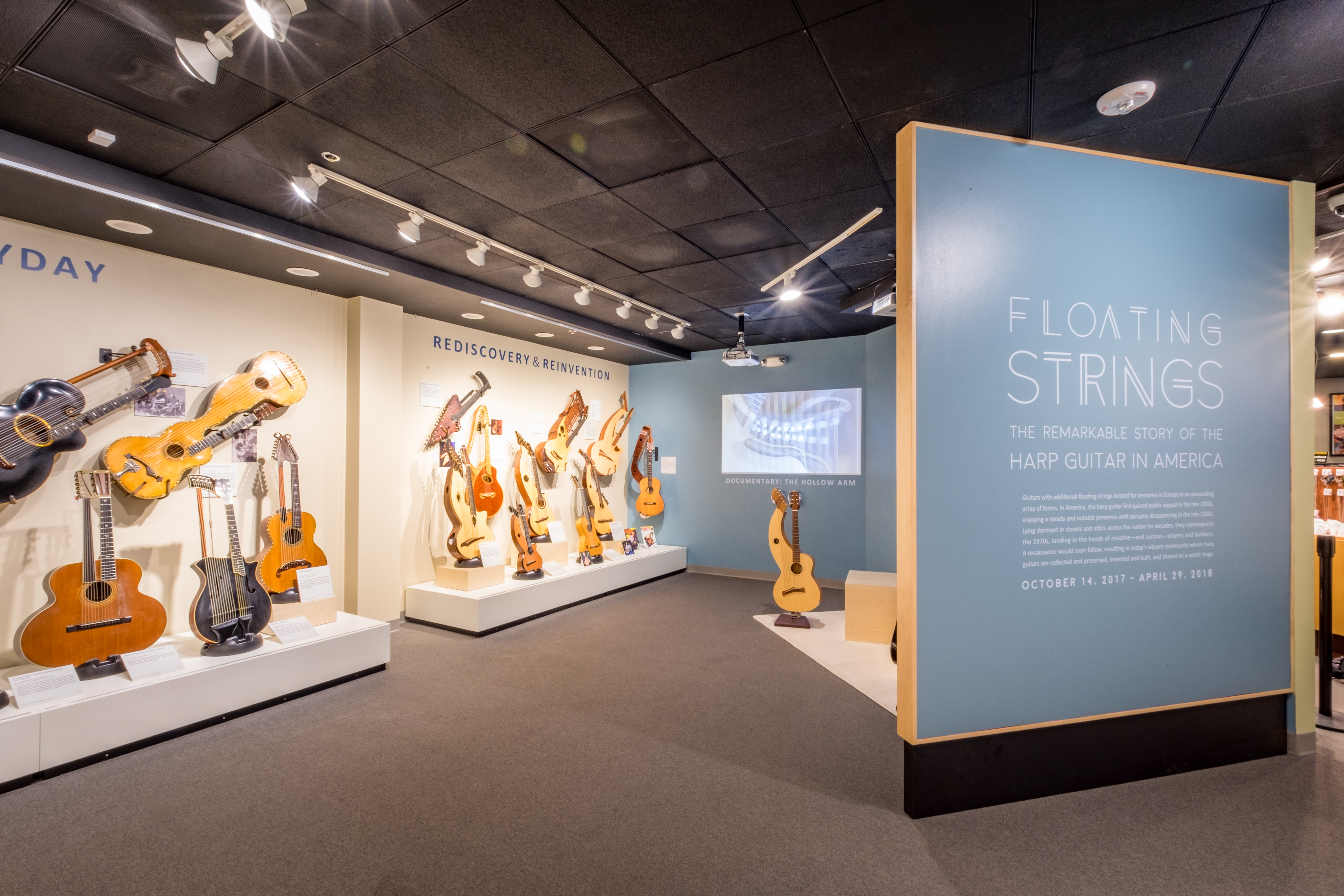 The Museum of Making Music's special exhibition entitled “FLOATING STRINGS: The Remarkable Story of the Harp Guitar in America” opened on Saturday, October 14th. The exhibition is developed and designed by museum staff along with guest curator, Mr. Gregg Miner—one of the world’s foremost harp guitar scholars, and will include over 40 beautiful examples of this unique instrument. In addition to the stunning display of instrumental craftsmanship, the exhibition also looks at the history of the harp guitar, from its beginnings in Europe to its current status and use in the United States today. Through April 2018, the special exhibition explores the past, present and future of this extraordinary instrument.

FLOATING STRINGS: The Remarkable Story of the Harp Guitar in America

Throughout history, musicians and instrument makers have turned to technology to find solutions to their musical problems. Three hundred years ago, adding floating strings to a fretted instrument was an appropriate solution for musicians who wanted to increase the bass range of their guitar to achieve their musical goals.

Known today as “harp guitars,” these instruments traveled through time, crossed continents and oceans, fell in and out of popularity, and defied standardization.  Ironically, in today's world of advanced technology and endless multi-string guitar options, harp guitars are technically no longer necessary; however, their popularity is on the rise.  Why? 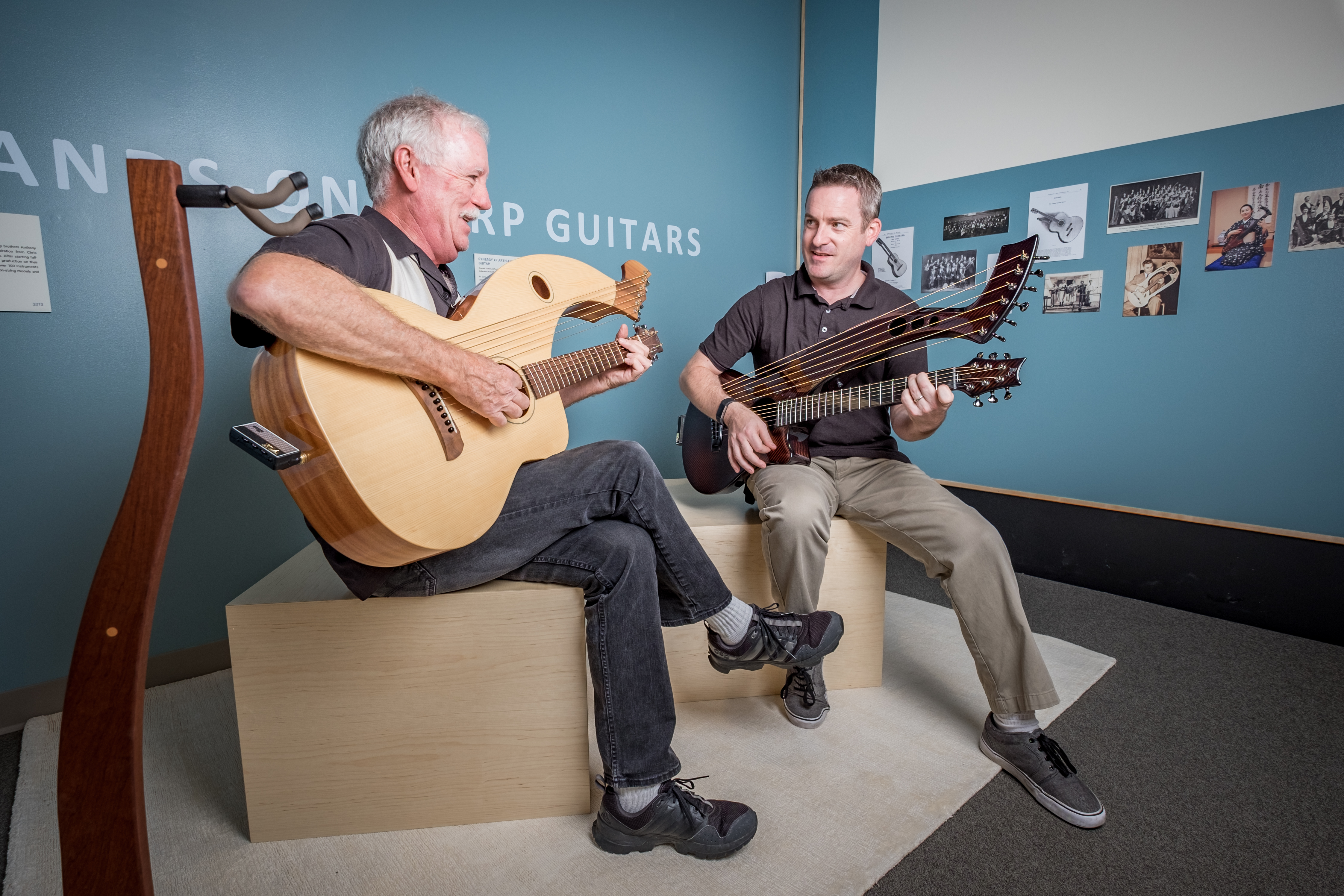 What is a Harp Guitar?

Harp guitars come in many shapes, sizes and forms. They do have however, a common defining element. In addition to the fretted neck strings, there are additional strings which are not fretted, i.e. floating. These strings can be attached in a variety of ways, and are typically plucked with the thumb or fingers.

The harp guitar wasn’t originally referred to as such. Depending on the country, historical period or configuration of instrument, they were called by many different names, and sometimes given no special name at all. They were simply “guitars.”

The term “harp guitar” as we understand it today was invented and popularized in the United States. With the most successful manufacturers of the day championing the new name, it soon became common vernacular. And, with the globalization of our planet through the internet, it was only a matter of time before “harp guitar” became an acceptable alternate term for any guitar with the features above. In 2014, “Harp Guitar” was finally given its own full entry in The Grove Dictionary of Musical Instruments (Gregg Miner, author, 2014).

Guitars with additional floating strings existed for centuries in Europe in an astounding array of forms. In America, the harp guitar first gained public appeal in the late 1800s, enjoying a steady and notable presence until abruptly disappearing in the late 1920s.  Lying dormant in closets and attics across the nation for decades, they reemerged in the 1970s, landing in the hands of creative—and curious—players and builders.  A renaissance would soon follow, resulting in today's vibrant community where harp guitars are collected and preserved, invented and built, and shared on a world stage.

In 1659, G.B. Granata of Italy wrote a series of compositions for a "chitarra atiorbata," an instrument with seven floating bass strings below the guitar's then-standard five strings.  While floating strings were common on lutes, this is the earliest indication we have of floating strings on a guitar. Over the next century, other experimental instruments made brief appearances.  In the late 1700s, instruments we now classify as harp guitars emerged. They did not attract a repertoire however, and passed into oblivion.

Thanks to both musicians and builders, the instrument came into its own in the 1800s.  In the cultural centers of Europe, virtuosos on the six-string guitar created both a repertoire and an audience for guitars with floating bass strings. In Vienna, the center of excellence in guitar making at the time, luthier J.G. Staufer and his contemporaries made improvements on instruments that would became known as bass guitars.  And in the 1880s, the popularity of the Schrammel brothers’ quartet--and their "Schrammelgitarre"--launched an entire industry of bass (or contra) guitar building.

At the turn of the 20th century, guitarists throughout Europe and Russia continued to play guitars with floating bass strings.  In several regions of Italy, a new wave of guitar virtuosos sparked an explosion of harp guitars in increasingly spectacular forms.  This ensured the popularity of the Italian harp guitar into the mid-1900s.

European-made guitars with floating strings likely made it to the United States in the hands of immigrants during the 1800s, although no record of this has yet been found.

The earliest documentation of harp guitar building in America was a series of four two-neck, or 10-string guitars ordered in 1859-60 from C.F. Martin by a Virginia guitar teacher.  Martin himself had apprenticed in Vienna prior to emigrating and settling in Nazareth, PA, and was likely aware of guitars with floating bass strings.  He did not pursue the idea, however, and things were quiet for several decades until a flurry of new harp guitar production began in the Midwest.

In 1885, traveling businessman J. Hopkins Flinn arrived at J.W. Jenkins' Sons Music Co. in Kansas City with a new invention: he had nailed a piece of wood onto the neck of a standard guitar and used violin tuners to add three floating strings.  After his instrument was met with lackluster enthusiasm, Jenkins furnished Flinn with an improved six-bass string design.  The result?  What is believed to be America's first production harp guitar.

Meanwhile, in the Pacific Northwest, a curious hollow arm guitar appeared, designed by Norwegian immigrant, Chris Knutsen.  When he subsequently added floating bass strings to that arm, he created America's first hollow-arm version of the harp guitar. Soon thereafter, over two dozen patents for harp guitars were granted in the United States.

By 1900, it was clear that the American harp guitar was making an impact.  In a world of small, softer toned parlor guitars, they stood out in every way. Players responded to the new musical possibilities, the visual impact of the large bodies, and the increasingly popular use of steel—instead of gut—strings. Harp guitars were impressively loud and could be heard above the ubiquitous banjos and mandolins.  Members of the burgeoning American banjo, mandolin and guitar (BMG) movement wholeheartedly adopted them. Their publications, The Cadenza and The Crescendo, featured them prominently in articles, advertisements and testimonials.

While solo use was rare during this period, they became indispensable as accompaniment instruments in groups of every size--from duos to large mandolin orchestras.  Harp guitars also accommodated a wide variety of musical tastes: they were heard in serious classical settings, in popular tunes and recordings, and in novelty vaudeville acts. Considered a family-friendly instrument, they appeared in the households and community gatherings of turn-of-the-century America.  Eventually, nearly every guitar builder or manufacturer offered a harp guitar and new designs and experiments proliferated.

By 1920, harp guitars were firmly established in nearly every style of American music. By 1930, they had effectively vanished. Why?  Changing tastes, technological advances, and an ever trend-conscious American public were certainly factors.  Vaudeville, where harp guitars had once flourished, was replaced by cinema, and then radio.  When the Jazz Age arrived soon after World War I, players traded their mandolins for tenor banjos, and preferred piano and drum accompaniment over harp guitar. If a guitar was needed, the new arch top guitar with its punchy sound was the better choice.  There were a few harp guitar holdouts as late as 1930, when they could still be heard as accompaniment instruments in popular Hawaiian music ensembles.

Further causes for the demise of the harp guitar include the fact that it was never standardized, either in number of strings or tuning; no memorable harp guitar soloist ever came to the fore; there was no defined repertoire; and both teachers and method books were scarce. The harp guitar had been embraced at a time when it played an important musical role—to be heard over the banjos and mandolins it accompanied.  And so, when more voluminous instruments arrived—the resonator guitar and, later, the electric guitar—it was Game Over. Or was it? 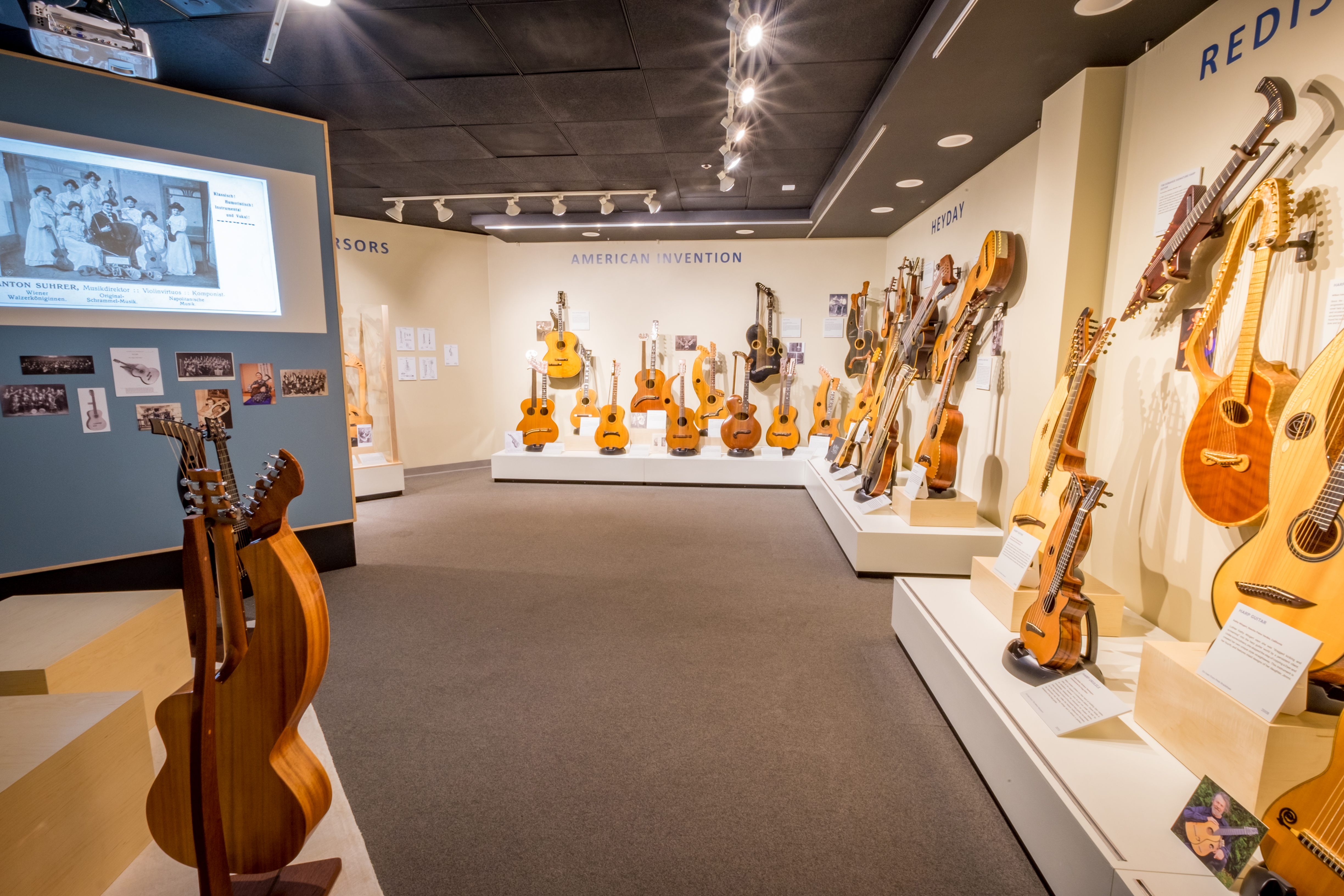 Although the sights and sounds of America's harp guitar had left the public arena by 1930, the instruments themselves did not actually disappear.  Thousands rested in attics, closets and basements for decades.  It was only a matter of time until they would be rediscovered and resurrected by a new generation of builders and players.

During the folk music boom of the 1960s, new music stores carrying all sorts of forgotten vintage instruments opened their doors.  It was there that many musicians were introduced to yesteryear’s harp guitar. Gradually, the instrument began to appear in public forums and in the 1980s, several virtuoso fingerstyle guitar players introduced them to receptive public audiences using novel playing techniques.

This rediscovery of vintage harp guitars also sparked creative reinventions of the instrument.  Reworkings of old designs, entirely new designs, as well as customizable factory production models emerged. Thus, the continued (yet sporadic) development of the harp guitar that we have witnessed for almost four centuries, continues today.

Interestingly, in a world of efficiencies, uniformities, homogeneity and streamlining, the harp guitar remains steadfast in its identity of non-standardization.  While this may lessen the likelihood of a wholesale adoption of a single common instrument, it increases opportunities for creativity, fun, surprise and astounding beauty.

And perhaps therein lies the real definition of a harp guitar!

Looking into a child’s eyes as the power of music ‘clicks’ cannot be described adequately in words. It is so powerful!