Where are the Best Communities for Music Ed in the USA? 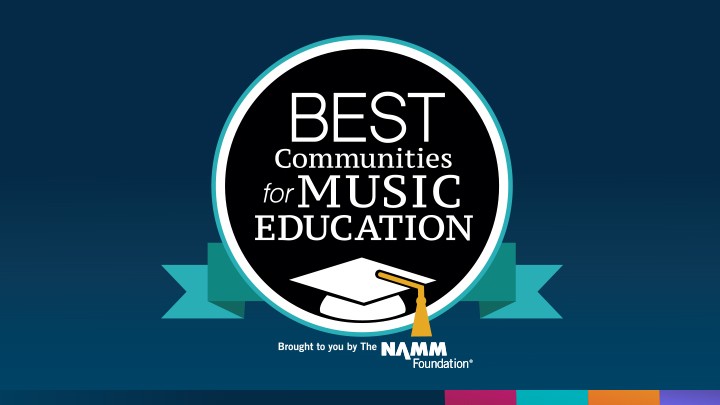 This week, The National Association of Music Merchants (NAMM) Foundation recognized 623 school districts in 41 states as among the Best Communities for Music Education (BCME). Now in its 20th year, the program honors schools and school districts for outstanding efforts by teachers, administrators, parents, students, and community leaders and their support for music education as part of the core curriculum. “It’s worth noting that we have some school communities that have received this recognition year after year. A few have been there for 20 years,” said Mary Luehrsen of The NAMM Foundation. “But, every year, new schools and districts are upping their game when it comes to music and the arts, often despite budget and curriculum pressures.”

In cooperation with researchers at The Music Research Institute at the University of Kansas, the BCME program evaluates schools and districts based on funding, staffing of highly qualified teachers, commitment to standards, and access to music instruction. For the 20th anniversary, a new survey was developed for use in the selection process under the advisory of music education leaders from across the nation.

One music program receiving recognition for the first time this year is the community surrounding the Inspire School of Arts & Sciences in Chico, California, the site of the recent Camp Fire wildfire. According to the school’s principal, Dan LaBar, the arts can provide a sense of community and healing.  The five high schools in the Chico/Paradise area came together as one choir for the first time after the fire.  “We had to bring kids together,” said LaBar. “They need to heal.”  While many families have left the area as a result of the devastating fire, the community has rallied around its music programs as a way to return to normalcy and encourage hope for those students who remain.

On the other side of the country, the Henrico County Public Schools, outside of Richmond, Virginia, has maintained a BCME designation since the program’s beginning 20 years ago. “The schools in Henrico have always believed in the arts,” said Rick Tinsley, who directs the music programs at nine county high schools and 12 middle schools. “There were some very tough years when funding was cut back. The one thing they didn’t cut was funding for music, and one of the reasons was because we were seen as a Best Community for Music Education.”

Since the passage by Congress in 2015 of the Every Student Succeeds Act (ESSA) and a stated emphasis on a well-rounded education, many schools districts have recommitted to music and arts education programs. One such district is the Anaheim Elementary School District in Anaheim, California that also is receiving its first Best Community for Music Education award this year.  The award celebrates the districts five-year commitment to completely reinstate music education for every child in the district via an innovative, sequential curriculum that is part of the school day for all students.

Evidence continues to accelerate around the benefits of music education for students, schools, and communities. In 2018, Music Matters, the condensed guide from the Arts Education Partnership and co-sponsored by the Country Music Foundation and The NAMM Foundation, was released. The report offered key findings including music students do better in English, math, and science than their peers without music; and more music and art equals fewer dropouts and a reduced number of suspensions.

“Even with compounding evidence of the benefits and importance of music education, many music education programs are not adequately funded and struggling for adequate resources for their proper   place in the curriculum,” confirmed Luehrsen. “The Best Community districts and SupportMusic schools show what can be done when teachers, school and community leaders, and parents all agree that music is essential and not optional as a learning force that must be available to all students. We dream of the day when all districts aspire to earn this distinction.”

Over the past 20 years, the number of school districts gaining BCME recognition has grown, from fewer than 100 in 1999 to more than 600 today. BCME designation has helped raise local awareness of quality music programs from coast to coast and has assisted communities in securing funds for music programs threatened by budget cuts.

Seeing a love of music come in the next generation and in the younger kids now, it’s amazing. They are the future.