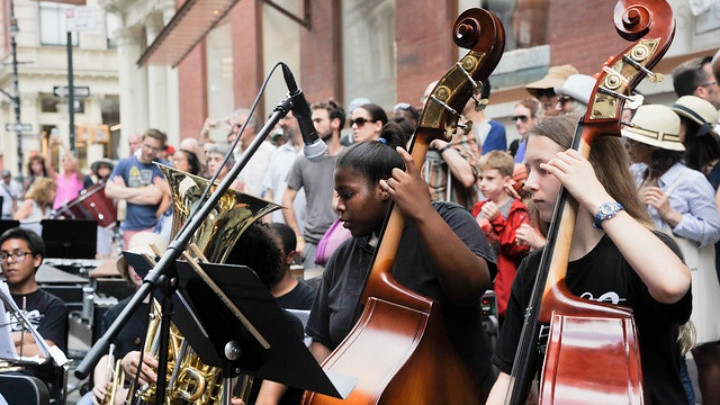 Make Music Day, the worldwide festival of music held annually on the summer solstice, today announced its updated schedule of unique, exciting and culturally diverse events for its 40th-anniversary celebration and full in-person return on June 21. Encompassing more than 5,000 free outdoor concerts, performances, music lessons and jam sessions nationwide, the daylong musical free-for-all will be staged in over 100 U.S. cities – with the flagship event in New York City – and the entire states of Connecticut, Hawaii, New Mexico, Vermont and Wisconsin.

Launched in France in 1982 as the Fête de la Musique, Make Music Day has become a global phenomenon, celebrated by hundreds of millions of people in more than 1,000 cities in 120 countries, including the U.S., where it spread quickly after debuting in New York in 2007. Held on the longest day of the year, the world's largest annual music event celebrates and promotes the natural music maker in everyone, regardless of age, background and skill level.

Completely different from a traditional music festival, Make Music Day is open to anyone who wants to take part. Reimagining their cities and towns as stages, every kind of musician – young and old, amateur and professional, of every musical persuasion – fills streets, parks, plazas, porches, rooftops, gardens and other public spaces to celebrate, create and share their music with friends, neighbors, and strangers.

To honor the festival's 40th anniversary and in homage to its French roots, a special concert series called Faire la Fête will feature 40 concerts in 40 countries, showcasing music by French songwriters and composers. In New York City, the festivities will kick off with a special morning ceremony with French and U.S. elected officials and dignitaries at The Battery, in the shadow of the Statue of Liberty, our nation's powerful symbol of the friendship between France and America. The ceremony will include a performance of Carnival of the Animals by French composer Camille Saint-Saëns, written in 1886, the same year the Statue of Liberty was inaugurated. Throughout the day, dozens of French-themed concerts will be held at seven outdoor locations at Liberty Island, Ellis Island, and The Battery.

Highlights of Make Music Day in the U.S. will include Flowerpot Music in 24 cities including New York, Houston, St. Louis and Tucson where music will come from an unlikely but beautiful percussion instrument: the flowerpot; Sousapaloozas in New York, Portland (ME), Hartford, Wichita and elsewhere that bring together hundreds of brass, wind and percussion musicians to play the music of John Philip Sousa; and Mass Appeal in 65 cities where people of all ages and skill levels will join together to make music in large single-instrument groups.

Additional highlights include Street Studios in New York, Los Angeles, Detroit, Dallas, and Stamford CT (and internationally in Germany, Hungary, Mexico, and Brazil) where world-class DJs and producers will set up their gear on sidewalks and engage passersby and musicians to join in an entirely improvised music creation session, sponsored by Harman; a #MySongisYourSong global song swap, featuring over 200 songwriters around the world; and Uncommon Instruments, whereby the public can discover new and unusual instruments thanks to partners such as Makey Makey, which is supplying kits to 14 cities so performers can turn everyday objects into touchpads and use them for music, and Panyard, which is providing 27 cities with Jumbie Jams, an entry level steel pan designed to be easily played by anyone.

Make Music Day will also feature a Young Composers contest in partnership with the Grammy-winning vocal group The Swingles, and a Global Livestream featuring musicians in the U.S. broadcasting their performances on a shared livestream, together with their counterparts in several countries; and remote jam sessions hosted by jazz pianist Dan Tepfer called "Round Midnight Around the World" with collaborators in different time zones playing the Thelonious Monk standard together using low-latency FarPlay audio software.

City-specific highlights around the U.S. will include:

Additionally, in accordance with an annual tradition, and in a show of visual harmony, iconic buildings and landmarks across the United States including Niagara Falls will light up and shine orange – a color evoking the sun and the first day of summer – in honor of Make Music Day.

All Make Music Day events are free and open to the public. Participants who wish to perform, or to host musical events, may register at www.makemusicday.org. A full schedule of in-person events will be posted on the website in early June.

Make Music Day is presented in the U.S. by The NAMM Foundation and coordinated by the nonprofit Make Music Alliance. The official hashtag is #MakeMusicDay.

Held annually on June 21 to coincide with the summer solstice, Make Music Day is part of the international Fête de la Musique taking place in more than 1,000 cities across 120 countries. The daylong, musical free-for-all celebrates music in all its forms, encouraging people to band together and play in free public concerts. This year, over 100 U.S. cities and the entire states of Connecticut, Hawaii, Vermont and Wisconsin are organizing Make Music celebrations, encompassing thousands of music making opportunities nationwide. Make Music Day is presented by The NAMM Foundation and coordinated by the nonprofit Make Music Alliance. For more information, please visit www.makemusicday.org