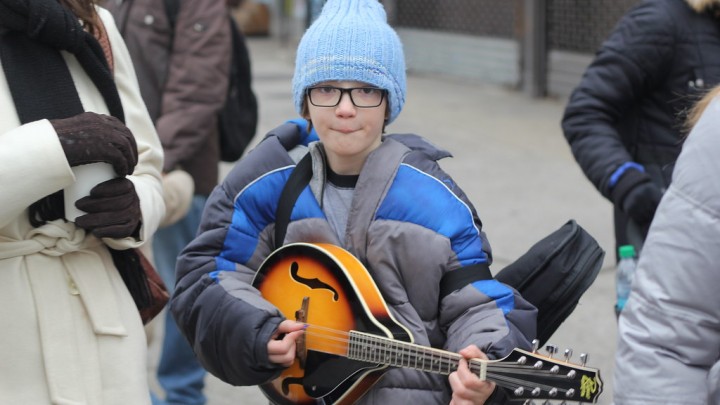 The annual event, happening on the shortest day (and longest night) of the year, welcomes people of all ages and musical abilities to celebrate the joy of making music with fellow community members. Since its start in 2011, Make Music Winter has become a positive outlet for music enthusiasts and their neighbors to meet up, learn a new skill, and march through public spaces while making music with bells, electric guitars, their own voices, percussion, and more unusual instruments. The event has grown to include 35+ cities across the nation each year.

In New York City, Make Music Winter events will ring in the holiday season across the five boroughs. In Manhattan, Patrick Grant and Tilted Axes: Music for Mobile Electric Guitars will play with other mobile musicians in “Standing Still” at noon in Herald Square, followed by the evening procession “Winter Luminaria with Tilted Axes” through Sasaki Garden set aglow with lights in a special partnership with NYU Faculty Housing Happenings, while Mobile Hallelujah singers will pop up at seven midtown locations. In Brooklyn, Flatfoot Flatbush will feature dancers, fiddlers, and pickers parading down Flatbush Avenue playing old-time tunes while flatfooting, a form of percussive dancing from Appalachia. In Queens, the second annual Queensboro Music & Dance Festival will showcase live music and dance from many of the borough’s cultures, teaching basic dance moves and providing handheld percussive instruments so that spectators can join in. And in the Bronx, the Melrose Parranda will join Make Music Winter for the eighth consecutive year, bringing this Puerto Rican caroling tradition to different “casitas” and community gardens in the neighborhood, led by notable Bronx musicians including Jorge Vázquez, Matthew Gonzalez, and Bobby Sanabria. Many other New York events will be announced in early December.

Make Music Winter’s signature Bell by Bell program also returns nationwide in 2022, featuring the world premieres of new compositions by Brian Chase (Grammy-nominated Yeah Yeah Yeahs) and Glenn Kotche (Wilco), named one of the “Greatest Drummers of All Time” by Rolling Stone. In eight cities on December 21 (Astoria, OR, Auburn, CA, Land O’ Lakes, WI, Los Angeles, CA, Milwaukee, WI, New London, CT, New York, NY, and Salem, OR) an event leader will distribute dozens of color-coded diatonic bells to the crowd, one color per note. At the front of the group, a team of conductors will wave corresponding colored flags to lead the group in slowly moving music by the composers, creating a sonorous, atmospheric soundscape. No one needs to be a musician in order to join in and play the pieces. At the New York performance, Brian Chase will perform as one of the conductors.

In California’s Auburn and Long Beach cities, as well as Boston, MA, Chicago, IL, Elgin, IL, and Macon, GA, participants can allow The Resonant Path to melt away the past year’s frustrations. Each city will present a path lined with gongs, continuously played over the course of an hour, that creates a natural crescendo and decrescendo as participants walk past, enveloped in waves of sound.

Make Music Winter is presented by The NAMM Foundation and coordinated by the nonprofit Make Music Alliance.

Looking into a child’s eyes as the power of music ‘clicks’ cannot be described adequately in words. It is so powerful!