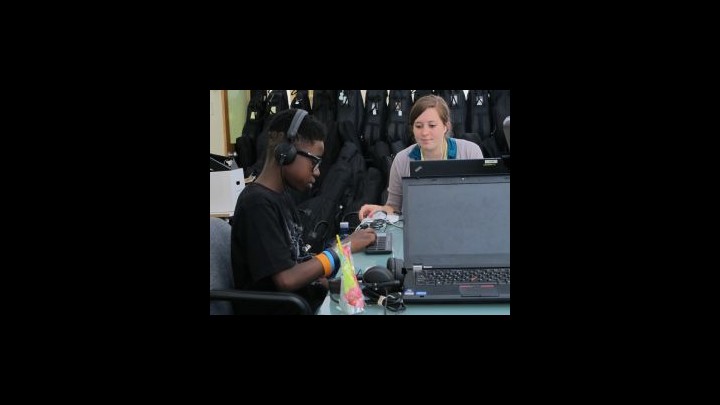 A new Northwestern University study funded by the NAMM Foundation provides the first direct evidence that a community music program for at-risk youth has a biological effect on children’s developing nervous systems. Two years of music lessons improved the precision with which the children’s brains distinguished similar speech sounds, a neural process that is linked to language and reading skills.

“This research demonstrates that community music programs can literally ‘remodel’ children’s brains in a way that improves sound processing, which could lead to better learning and language skills,” said study lead author Nina Kraus, the Hugh Knowles professor of communication sciences in the School of Communication and of neurobiology and physiology in the Weinberg College of Arts and Sciences at Northwestern.

“Music Enrichment Programs Improve the Neural Encoding of Speech in At-Risk Children,” published in The Journal of Neuroscience, is one of the few studies to evaluate biological changes following participation in an existing, successful music education program.

Kraus, director of Northwestern’s Auditory Neuroscience Laboratory, and her team collaborated with Harmony Project.  Harmony Project, a NAMM Foundation grantee, provides free music instruction to thousands of disadvantaged children from gang-reduction zones in Los Angeles. Children between the ages of 6 and 9 participated in the study. The research team traveled to Los Angeles to evaluate them as they enrolled in Harmony Project’s programs and returned each summer for the following two years to evaluate them longitudinally.

“We used a quick but powerful neural probe that allowed us to gauge speech processing with unprecedented precision. With it, we found that the brain changes only followed two years of music training,” Kraus said. “These findings are a testament that it’s a mistake to think of music education as a quick fix, but that if it’s an ongoing part of children’s education, making music can have a profound and lifelong impact on listening and learning.”

Research from around the world has suggested links between music training, enhanced brain function and heightened language skills. This is the first study, however, that uses random assignment to evaluate brain changes in collaboration with an existing and successful community music program that targets disadvantaged children. Prior research has focused on individuals from affluent homes who received private lessons.

Martin approached Kraus several years ago, having observed the positive impact that music was having on Harmony kids’ lives. Since 2008, 93 percent of Harmony Project seniors have graduated in four years and gone on to colleges despite dropout rates of 50 percent or more in the neighborhoods where they live.

“Thanks to this finding, sustained music training is now an evidence-based method for closing the achievement gap between poor kids and their more advantaged peers,” said Margaret Martin, founder of Harmony Project. “Now we know this success is rooted, at least in part, in the unique brain changes imparted by making music.”

“Dr. Kraus’ work provides more evidence for what so many music teachers have seen firsthand, the power of sustained music training in enriching and changing children’s lives for the better” said Mary Luehrsen, executive director of the NAMM Foundation. “This study is an important contribution to a body of research that articulates the power of music education and its rightful place in school curriculum and available to all children.”

“Biologically, you are what you do, and your past shapes your present,” Kraus said. “Community interventions have the potential to instill salient benefits in children that can set them up for better learning in and out of the classroom.”

These findings provide biological backing for the large-scale implementation of these programs to promote child brain health and development.

For more about the Auditory Neuroscience Laboratory’s research on music and learning-associated brain plasticity, visit http://www.brainvolts.northwestern.edu. Start with “friendly overviews.”

The Grammy Foundation and the Hugh Knowles Center join the NAMM Foundation in supporting this important work.