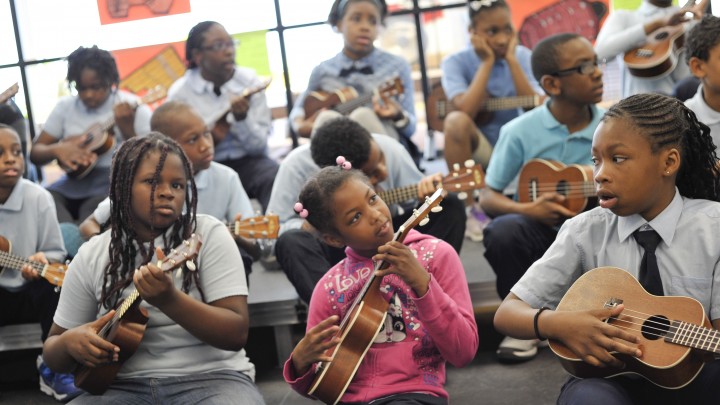 Music now resonates through 27 of the nation’s most underserved schools and districts thanks in part to renewed Turnaround Arts support from the NAMM Foundation. Grants to the tune of $214,000 for musical instruments, music teachers, and arts integration into other subject areas will support phase II Turnaround Arts. Turnaround Arts, a President’s Committee on the Arts and the Humanities (PCAH) program, is a public-private partnership that uses the arts to help narrow the achievement gap, increase student engagement and improve the culture and climate in the country’s highest poverty schools.

“NAMM members have been engaged in Turnaround Arts schools in New Orleans and Washington D.C., and we have been immediately pulled into the positive energy that the arts have infused into these schools,” said NAMM Foundation Director Mary Luehrsen. “We are honored to be involved in this important effort and are inspired by the progress students are making through the power of music and the arts.“

New research, conducted with support from the NAMM Foundation, reveals that between 2011 and 2014, students at Turnaround Arts schools demonstrated significant progress in student achievement. Of the eight observed schools, seven improved their overall reading proficiency rates and six improved their math proficiency rates. Half of the observed schools improved their attendance rates significantly. And more than half of the schools dramatically reduced suspensions. Click here for an overview of the research findings or here for the full report.

“As a result of NAMM Foundation’s generosity, not only are our students getting the opportunity to experience the focus, confidence and joy that comes from engagement in music and the arts, they are also becoming more engaged in learning throughout the rest of school day,” said Kathy Fletcher, national program director of Turnaround Arts.

Turnaround Arts started as a pilot program in eight “turnaround schools,” public schools in the lowest-achieving five percent of their state that are receiving School Improvement Grants through the U.S. Department of Education. Showing progress, Turnaround Arts is now in 35 schools and districts in California, Colorado, Connecticut, Illinois, Iowa, Louisiana, Massachusetts, Minnesota, Montana, Oregon and Washington D.C., with plans to expand to as many as 60 schools.

Mr. Holland’s Opus Foundation assisted NAMM with the grant review and will provide technical support to the schools in implementing their music programs. NAMM Foundation’s philanthropic efforts such as this are supported in part by the global music product industry’s support of NAMM Shows and membership in NAMM.

The NAMM GenNext experience was an incredibly motivating, empowering, and inspiring activity as a young professional in the music industry.