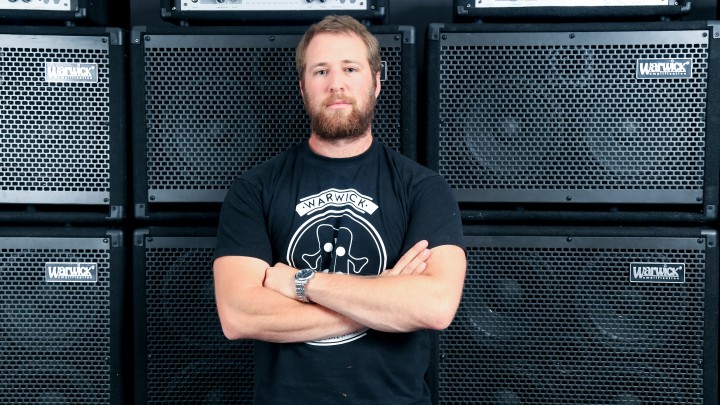 As a President’s Innovation Award Winner in 2013, Jon Giroux attended his first NAMM Show in Anaheim, where he was able to  learn about and connect with the industry firsthand. Following a successful internship with D’Addario in 2014, he was hired by Warwick & Framus to work in artist relations and as a showroom manager in Nashville. We followed up with Jon to discuss his experiences at The NAMM Show, life after college and how winning the President’s Innovation award helped to launch his career.

What got you initially interested in the music products industry?

Music was always very present in my house growing up. My grandfather was a jazz pianist, and my mother played piano as well. I started on piano when I was 5 years old. When I got to the age where it was time to pick an instrument for band or orchestra, I chose the bass because my brother played it. In college, I majored in music business and picked up a business administration minor. I always knew I'd like to do something with music, but I was never really sure what until I started learning more about the business side of the industry. Then I was hooked.

How do you think being a President’s Innovation Award recipient helped you in your career?

Winning the President’s Innovation Award was really what allowed me to attend the show. Because of the financial portion of the award, many of the other students who attended with me were actually able

to make the show a reality. It’s funny, many of those other students I went to school with who were Innovation Award recipients are now working in the industry as well. It’s like a little mini reunion each year at the show.

In addition to attending The NAMM Show as a President’s Innovation Award winner, you also attended the show while interning for D’Addario. How did this set you up for success?

My experience at NAMM was life changing. Through NAMM I landed my first internship with D'Addario and was eventually able to get a second internship with them doing artist relations in Nashville, where I now live. At the end of that second internship, I was fortunate enough to have met the right person who recommended I reach out to the owner of Warwick. Exactly one month after my last day with D'Addario, I was on a plane for Germany. Had I not been at NAMM, I think it's safe to say I wouldn't be where I am now.