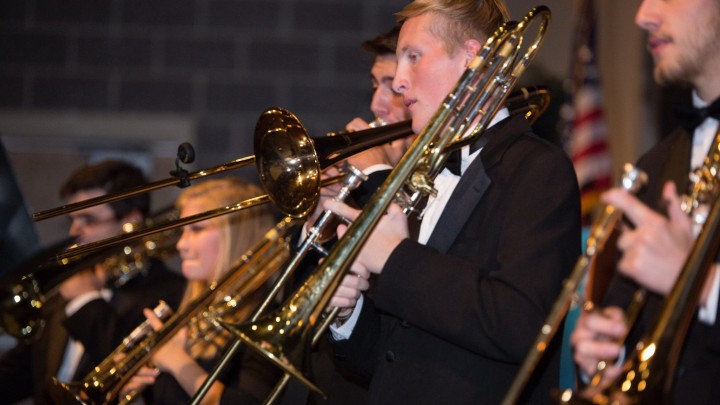 Students at Cuthbertson High School in North Carolina recently earned a unique opportunity to bring a light to their music program. Cuthbertson was one of six schools across the country to bring The NAMM Foundation’s SupportMusic Community Forum and Lennon Bus two-day residency to their school, after winning a video contest.

Cuthbertson High welcomed the Community Forum to their rural town of Waxhaw, North Carolina, on the morning of October 20. The forum celebrated and recognized the benefits of music education at CHS.

The high school band at Cuthbertson is largely supported by booster parents- and the fervor of support trickles down from band parents directly to the students who play. The participants who recorded on the John Lennon Educational Tour Bus on Oct 19 included members of The First Block Rock Band. Not only were the students prepped to record on the bus, they had already written the song prior to stepping into the mobile recording studio.

“With band, we can take pride in the music we play,” said Lindsey Nicholas, a student at CHS.

Family and community are two words that aptly describe music education at Cuthbertson High.  This intersection was widely recognized during the Community Forum- by administrators, their band director, and students.

“We have ensemble etiquette. You have to take care of the person next to you,” said Todd Ebert, the Band Director of CHS.

Trey Burke, member of the First Block Rock Band, recently moved to the Waxhaw area and attributed joining the Cuthbertson High School band to “walking into a family.”

Also integral to the success at Cuthbertson High is the support of Superintendent Dr. Ellis, who has encouraged participation in music classes.  Ellis delivered an inspiring keynote, which marked the start of the Community Forum, and thanked everyone involved.

In 2015 Cuthbertson High School received a SupportMusic Merit Award as part of The Best Communities for Music Education program. If you are interested in learning how to apply to be considered for this national designation for 2016, please visit nammfoundation.org.

Having now been recognized twelve times by the National Association of Music Merchants as a Best Communities for Music Education, I can confidently say that this designation has helped in our efforts to increase our funding, add personnel and grow our programs. What more can you ask for!