The NAMM Foundation Announces New Board of Directors 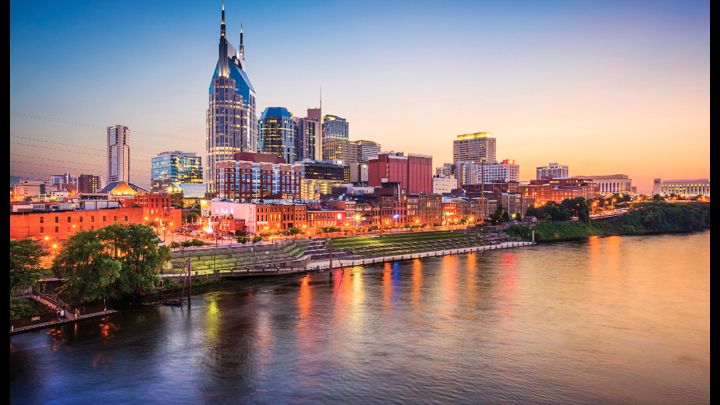 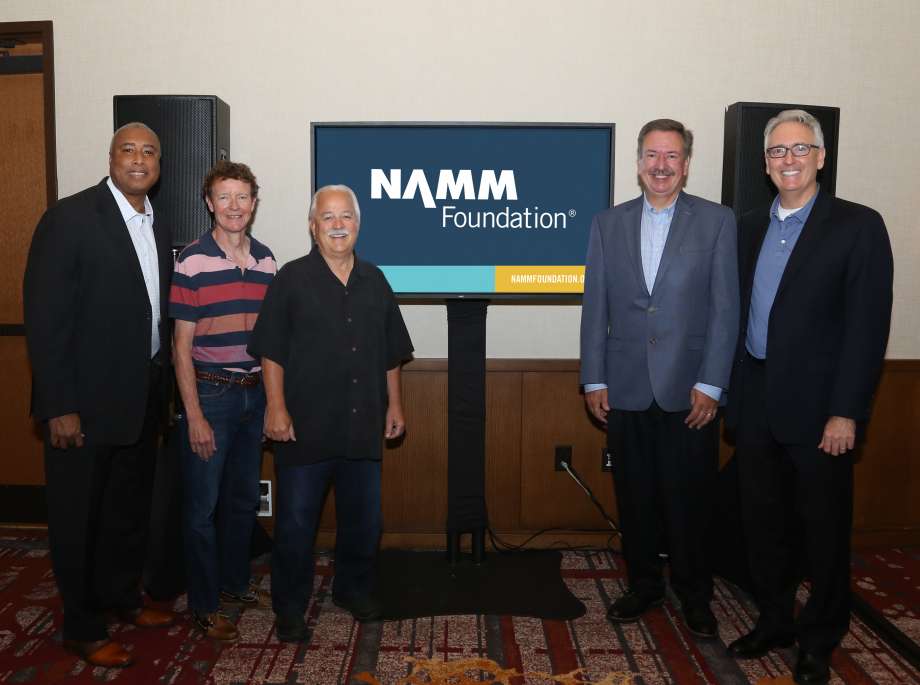 At The 2017 Summer NAMM Show, The NAMM Foundation announced the appointment of five industry leaders to the organization’s newly created board of directors. Chris Martin, President and CEO of C.F. Martin & Co., will serve as Chair of The NAMM Foundation in addition to his role as Vice Chair of The NAMM Executive Committee; NAMM President and CEO Joe Lamond will serve as President of The NAMM Foundation; Tom Bedell, CEO, Two Old Hippies in the role of Vice Chair; Chuck Surack, Founder and President, Sweetwater Sound as Secretary Treasurer; and Bernie Williams, four-time World Series champion, President's Committee on the Arts and the Humanities Turnaround Artist, and Latin Grammy®-nominated jazz guitarist in the role of director. Each director will serve a three-year term and offer guidance to the Foundation’s vision of creating recreational music making for all people.

“The work of The NAMM Foundation is guided by NAMM’s vision of a world in which every child has a deep desire to learn music and a recognized right to be taught and a world in which every adult is a champion and defender of that right,” shared Joe Lamond, NAMM President and CEO. “The work of this board and of the many volunteers and donors will be to harness the power of our industry to achieve that vision.”

Since 1994, The NAMM Foundation has granted over $16 million dollars to programs which share in the organization’s vision to create access to and advance active participation in music making across the lifespan; the organization was later identified as a Foundation in 2006. Through the generosity of NAMM’s 10,300 member companies and individual donors, the organization works to support scientific research, philanthropic giving, and public service programs. NAMM Foundation programs include NAMM’s Museum of Making Music together with signature programs that include the SupportMusic Coalition, a coalition which unites non-profit organizations, schools, and businesses working to ensure that music education is supported in communities everywhere; funding leading qualitative and quantitative research on music and music making from top neuroscientists and researchers; the Best Communities for Music Education recognition program, which acknowledges and applauds schools and districts across the U.S. for their support for and to quality music education programs; GenNext, a program designed to foster emerging, college-aged music industry professions; Music Education Days at the NAMM Show that unites music educators with the music products industry; and grant making to nonprofit music making service organizations in the U.S. and abroad.

About the Board of Directors:

Chris Martin is chairman and CEO of C.F. Martin & Co., Inc., a manufacturer of acoustic guitars and strings, based in Nazareth, Pa. C.F. Martin & Co., Inc. is a member of the Music Distributors Association and the Guitar and Accessories Marketing Association. Chris holds a bachelor of science in business administration from Boston University and was awarded an honorary doctorate of music from Muhlenberg College.

A native of Spirit Lake, Iowa, Tom Bedell earned his undergraduate degree from Stanford University in 1973 and attended the UI College of Law. After law school, he headed a consulting firm in Washington, D.C., where his father, former U.S. Representative Berkley Bedell, was serving in Congress.

In 1979, Tom took over as president of what was then Berkley & Company, the fishing- tackle business that his father founded as Berkley Fly Company in 1937. The company was sold in 2007. In 2009 Tom and his wife Molly launched Two Old Hippies, a clothing, gift and jewelry/acoustic guitar boutique and within a few years, acquired The Breedlove guitar company and Weber Fine Acoustic Instruments. Tom is on the Advisory Council of University of Iowa’s John Pappajohn Entrepreneurial Center.

Sweetwater's founder and president Chuck Surack was an entrepreneur from an early age. As a child, he made and sold pot holders by the hundreds and managed an extensive paper route. After he graduated from high school, his love of music led him to become a professional saxophonist and keyboard player in touring bands. In 1979, he combined that love of music with his entrepreneurial talents and founded Sweetwater Sound as a 4-track recording studio in the back of his VW bus. Sweetwater Sound quickly grew into a leading studio in the Fort Wayne area.

Chuck is very involved in community service and strongly believes in giving back. He currently serves on the boards of Lutheran Health Network and Lutheran Hospital, the Auburn Cord Duesenberg Museum, the Fort Wayne Philharmonic, and Greater Fort Wayne Inc., among others. He is also a member of Fort Wayne Mayor Tom Henry’s kitchen cabinet.

He and his wife Lisa are leading philanthropists in the Fort Wayne area, donating to more than 500 causes annually. The Association of Fundraising Professionals gave them the Outstanding Philanthropic Award in 2015.

Growing up in Puerto Rico, Bernie Williams discovered his love for baseball and music when at the age of eight he fell in love with the sounds of a flamenco guitar his merchant-marine father brought home from Spain, and also felt the same exhilaration when he first picked up a baseball bat. Williams credits his mother, who was a public school educator and principal, for insisting that he receive a well-rounded education and that music and sports went hand in hand. As a young student-athlete, Bernie excelled in both pursuits, going on to attend the special performance arts school Escuela Libre de Musica at the age of 13 and becoming one of the most noted young athletes on the island, both as a track and field standout posting record times in the 400 meters and one of Puerto Rico’s most sought-after young baseball prospects. At 17, Williams signed a contract with the New York Yankees and brought his love of music with him—first to Albany for his development in AA and then on to the Bronx and the most famous field in sports when called up to join the Yankees as number 51 in 1991.

Throughout Williams’ years with The Yankees, his passion for music continued and the sound of his guitar playing would often be heard in the clubhouse or during team flights. Whether acoustic or electric, a guitar was a constant presence in the star’s locker or equipment bag, and it was no surprise in 2003 when he demonstrated how serious his musical pursuit was with the release of his first album, “The Journey Within.” The record featured fusions of jazz, rock and the tropical rhythms of Williams’ heritage and was met with both strong critical praise and instant chart success reaching #3 on Billboard’s Contemporary Jazz Chart. Bernie Williams raised his musical game even further with the release of his second album “Moving Forward” featuring guest appearances by Bruce Springsteen, Jon Secada, Dave Koz, and an all-star cast of renowned studio musicians. The album debuted as Billboard’s #2 Contemporary Jazz album in the country, and spawned two consecutive Billboard #1 singles, “Go For It,” and “Ritmo de Otono.” The album was nominated for a Latin Grammy Award for Best Instrumental Album in 2009.

Bernie also co-authored a book in 2011 published by Hal Leonard Books titled, Rhythms of the Game: The Link Between Music and Athletic Performance. Williams earned his Bachelor of Music Performance degree from the Manhattan School of Music in 2016.

As a champion for music education, Bernie performed at The White House in May 2016 with students from his adopted Turnaround Arts school in Bridgeport, Connecticut. He has been a vital part of NAMM’s music education advocacy efforts in Washington D.C. as part of the NAMM Music Education Advocacy Fly-in every year since 2011.

Joe Lamond is the president and CEO of NAMM, The National Association of Music Merchants, a global not-for-profit 501(c)(6) trade association representing more than 10,300 manufacturers and retailers of musical instruments and professional sound products. The association’s mission is to strengthen the music products industry and promote the pleasures and benefits of making music.

Since 2001, Lamond has led the talented team at NAMM to achieve this mission through what the association calls its ‘Circle of Benefits’ business model, reinvesting the proceeds of its successful trade shows into grants, scholarships, scientific research, industry promotions, and public and government relations programs. These efforts have contributed to increased support for music education in our schools and greater awareness around the world of the benefits of active music making for people of all ages.

The NAMM Foundation is a non-profit supported in part by the National Association of Music Merchants and its 10,300 members around the world. The NAMM Foundation works to advance active participation in music making across the lifespan by supporting scientific research, philanthropic giving, and public service programs. For more information about The NAMM Foundation, please visit www.nammfoundation.org.

We are always aiming to improve ourselves and our community. Reminding those around us that music is essential to our community helps us move upward. Music is always worth it!