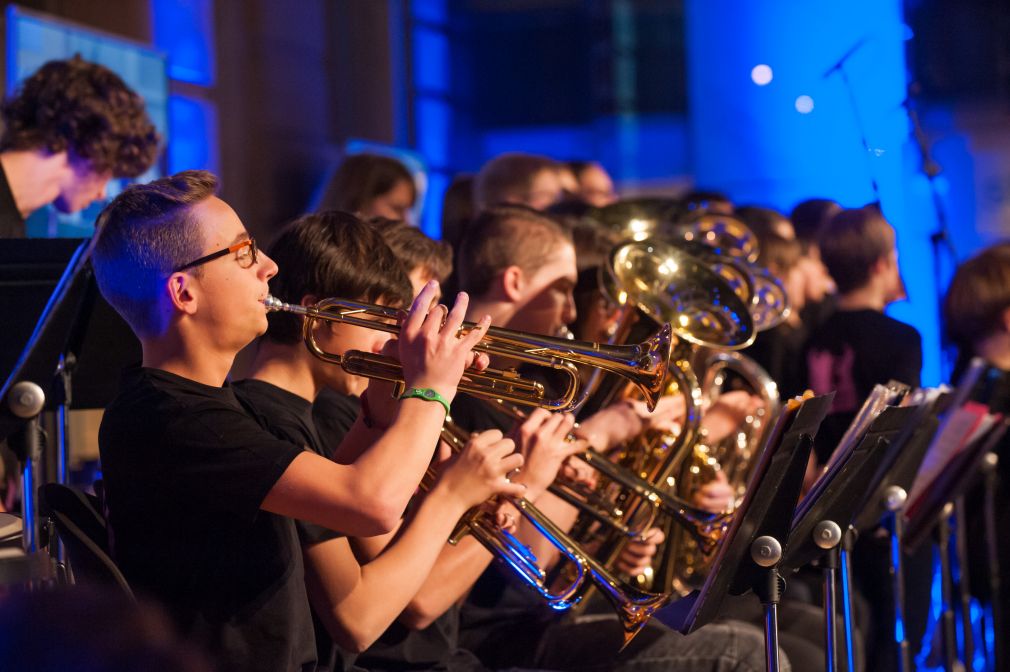 For the past several years, The NAMM Foundation has distributed music making grants to support a select number of nonprofit public service organizations. These organizations have missions to expand access and opportunity to music education for thousands of individuals and provide innovative music education and hands-on music making programs. One such program is Orchestre à l’Ecole which is changing the lives of students across France by getting them involved in orchestra classes. NAMM interviewed the program's general delegate, Marianne Blayau about how the program has been able to expand with the help of The NAMM Foundation.

What is the history of Orchestre à l’Ecole?

The association Orchestre à l'École was created in 2008 to develop and build on the program launched nine years before by the trade organization of musical instrument makers. It is a non-profit organization dedicated to fundraising and lobbying in order to facilitate the launch of new orchestral classes.

In 1999, a study showed that less than four percent of the French children played a musical instrument even though there was a unique network of conservatories and music schools subsidized by public funds across France. Only families that had musical backgrounds and/or financial means were the ones practicing music.

Two pilot orchestra classes were launched in Priority Education Areas (schools with a high percentage of students with both learning difficulties and behavioral problems) and music teachers from local conservatories would go to these schools twice a week to teach children three years and up.

The results were exceptional. Practicing music together at school had become a real tool against bullying and exclusion. The students’ behavior changed and their grades improved. Encouraged by these results, the CSFI made the orchestra class project its spearhead program. It took five challenging years to introduce this project into French schools. This included proposing new educational methods, incorporating traditional music, having schools accept collective teaching and eventually demonstrating that a trade organization can lead a national educational program in public schools.

Why did you first become involved in the Orchestre à l’Ecole?

I was working for a jazz label and a non-profit organization dedicated to international jazz called Django d’Or. In 2000, in order to encourage children to discover musical instruments, I created an event in a Parisian park. I distributed 200 instruments within the park so that people could try them under the supervision of musicians. These instruments were made available to me by the CSFI. Two school orchestras came to play in the park during the event and it was very moving. I kept in contact and a few years later I joined the CSFI to develop Orchestre à l’Ecole.

How have you seen the association grow since you’ve been involved ?

We’ve experienced significant growth each year, from about 40 orchestras in 2005 when I arrived, to 1,250 orchestras in 2017. There are currently more than 33,000 children involved in one of our three-year projects. When I created this association, we started collecting funds to help buy instruments. The money raised is used for :

In 2017, our association signed an official partnership with three ministries : culture, town and education, and we received subsidies from culture and education for the first time. Our organization has also been certified as a national resources center and we are published as a national quality charter.

What is the impact on the students that you have observed?

The rewards of this memorable collective experience extend far beyond the musical realm. Practicing music allows students to improve their discipline and working habits. The children become not only skilled musicians, but they also develop confidence, concentration, and a wide range of social and academic skills.

An artistic awakening encourages the students’ confidence and academic progress. The orchestras fall within a clear educational reward structure: the students will rediscover the joy of school thanks to a more direct relationship between study and its practical applications. They help the students make sense of their learning by involving them in every aspect of the project.

And finally, the benefits are lasting. Since each orchestra is a three-year project, the students and adults have time to watch it grow and root itself in success. This long term structure also allows all the other people involved in the project to get to know each other : teachers, music instructors, senior staff and conservatoire directors all coordinate to creative this collective endeavor.

How does the NAMM Foundation help you continue the work that you do ?

The financial assistance we have requested and received from the NAMM Foundation has played an indispensable role in the success of our project. Due to the numerous benefits of school orchestras, both within and beyond the educational context, we have grown year after year, expanding across each district of France.

Thanks to two years of funding from the NAMM Foundation, we were able to launch training courses at music schools across the country. The immediate success of the courses meant that, once we had established them, various training organizations, public and private, were motivated to invest in them as well. The program was soon able to sustain itself, and the resulting improvement of our orchestras became permanent.

In 2015, the funding provided by the NAMM Foundation went towards organizing several national rallies and gatherings. These events foster self-confidence and pride, by showing the students that their success is valued on a national level and in a professional context.

Since 2016, the NAMM Foundation grant has allowed us to buy instruments to enable new orchestras to be set up. Today more than 33,000 children are involved in the Orchestre à l’école program and we are getting more requests all the time from schools and music schools who want to set up orchestras.

What are your goals for the association for the next five years?

With our new government, we are experiencing a new phase of growth for the "Orchestre à l'ecole" system. Our three line ministries already adopted a clear stance in favor of music instructions in schools. They invited us to significantly increase the number of orchestras in schools going forward.

The government is going to help us with operating grants and will also help us by setting up orchestral focal points across France.

For the 2018/2019 school year, we’ll have to face a very large demand. We have already received more than 100 requests for new orchestras across France.

Our goal for the next five years is to continues to encourage people to create new orchestras. In 2022 our aim is to achieve 1,850 orchestras involving about 50,000 children!

Music teaches students creativity. If students are having a rough day, they can go into their music class and focus on something that is positive.