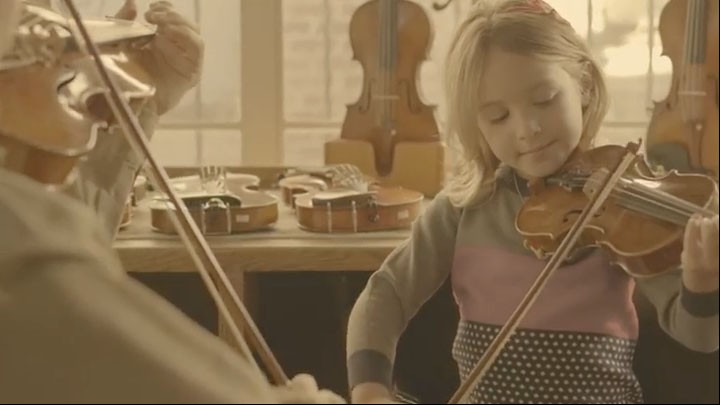 The NAMM Foundation is honored to receive an inaugural Gold Telly Award for its 2018 public service announcement video, “Music is For Life.” The video, which debuted at The NAMM Show earlier this year, was recognized in the category of “Promotional – Not for Profit” by the Telly Awards as a “top-tier” entrant, earning the status of a Gold Award, a new award category which recognizes “videos which rise above the rest” in each award category and represents less than 3% of all submissions. Other Gold Award recipients include Marc Jacob’s​ “A-Z of Music," ​ESPN​’s Celtics/Lakers: Best of Enemies "30 for 30," ​National Geographic’s​ "Breaking 2," ​Thrillist’s ​"No Leftovers," and ​Litton’s “Henry Ford's Innovation Nation." A complete list of winners is here.

The PSA video shares the story of a young girl, who, after a concert performance, is inspired to pursue music, and shows various stages of her pursuit, including a lessons program, in school, and later, at her own home passing her love for music on to her child. The video ends in her golden years, making music with her son. Actors in the production were cast for their musical talent, and NAMM Member Metzler Violin Shop in Glendale, California provided the shoot location for the lessons program.

The video was produced by Jenna Capozzi of Capozzi Productions, who counts past work with Pixar Animation Studios and Cheech Marin’s Chicano Visions in her resume, and current clients among the likes of Mattel, DreamWorks, BMW, Bank of America and others. Capozzi was inspired at a young age by her uncle, Grammy Award®-winning jazz legend Jon Hendricks to pursue the arts as her career. The PSA was directed by Adrian Ursu and scripted by Jenny Widmaier. The creative, including billboards and print ads featured across the nation, was designed by James Bowman of James Bowman Studio.

The NAMM Foundation annually produces a PSA which serves to inspire more people to make music and fewer to stop. Since 2009, NAMM PSAs have been aired both domestically and internationally, and have been featured in outdoor advertising campaigns and in digital media, resulting in views by millions of people. In 2017, the NAMM Foundation won the Bronze Telly Award for “Music Follows You,” a PSA featuring word poet, Steve Connell.

NAMM members are welcome to contact the NAMM Public Relations team for a digital copy of the PSA and its creative assets for use in their business. The PSA is also available on YouTube.

The Telly Awards was founded in 1979 to honor excellence in local, regional and cable television commercials with non-broadcast video and television programming added soon after. With the recent evolution and rise of digital video (web series, VR, 360 and beyond), the Telly Awards today also reflects and celebrates this exciting new era of the moving image on and offline. Annually, The Telly Awards receives over 12,000 entries from all 50 states and five continents. Telly Award winners represent work from some of the most respected advertising agencies, television stations, production companies and publishers from around the world.

This article was originally posted, here.