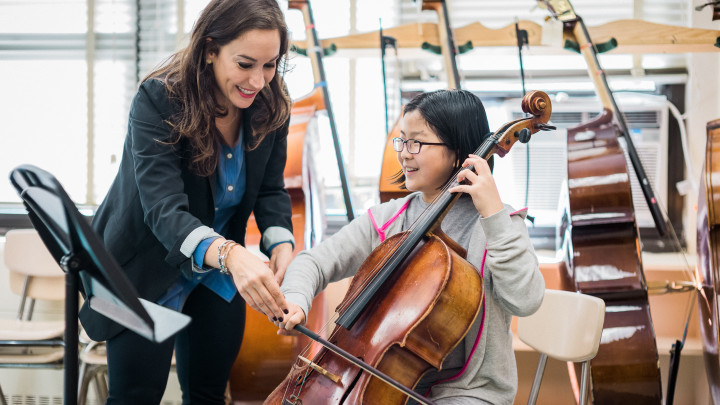 Music education opportunity is expanding in 19 of the nation’s most high-risk schools and districts thanks in part to ongoing Turnaround Arts support from the NAMM Foundation. Grants to the tune of $142,550 for musical instruments and music classroom materials support the current group of Turnaround Arts schools; the NAMM Foundation has awarded music education grants to all Turnaround Arts schools since its beginning in 2010. Turnaround Arts, a President’s Committee on the Arts and the Humanities (PCAH) program, is a public-private partnership that uses the arts to help narrow the achievement gap, increase student engagement and improve the culture and climate in the country’s highest poverty schools.

“We are grateful for the dedication of the administrators, teachers and parents in the Turnaround Arts schools and their efforts to create a new and better learning for students,” said NAMM Foundation Director, Mary Luehrsen. “NAMM members are engaged with many of these schools, providing instruments and repairs, and the energy that results from the opportunities for these students to have music in their curriculum is overwhelmingly positive. We are honored to be involved in this important effort and are inspired to witness the schools’ ability to change and grow with music.”

Research, conducted with support from the NAMM Foundation, reveals that between 2011 and 2014, students at Turnaround Arts schools demonstrated significant progress in student achievement. Of the eight observed schools, seven improved their overall reading proficiency rates and six improved their math proficiency rates. Half of the observed schools improved their attendance rates significantly. And more than half of the schools dramatically reduced suspensions. Click here for an overview of the research findings.

“Students at some of the country’s highest need schools are now experiencing the power of music thanks to the NAMM Foundation’s steadfast support for the burgeoning music programs at Turnaround Arts schools,” said Kathy Fletcher, Turnaround Arts National Director. “Through these grants, the NAMM Foundation has helped to create keyboard labs, mariachi bands, drumming groups, rock bands and most importantly given kids that wouldn’t otherwise have access to quality music education in school, a chance to play.”

Mr. Holland’s Opus Foundation has again assisted NAMM with the grant review and will provide technical support to the schools in implementing their music programs. NAMM Foundation’s philanthropic efforts such as this are supported in part by the global music product industry’s support of NAMM Shows and membership in NAMM.

Having been recognized twelve times as a Best Communities for Music Education, I can confidently say that this designation has helped in our efforts to increase our funding, add personnel and grow our programs. What more can you ask for?